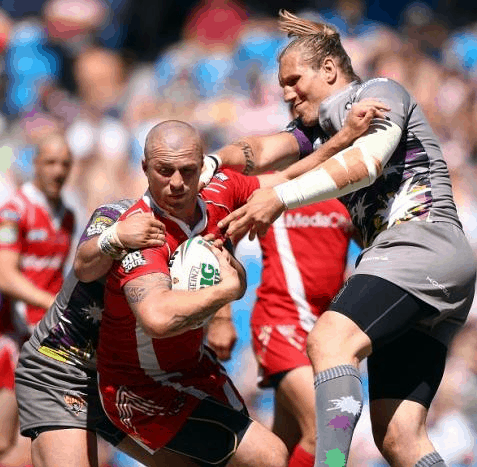 The gulf in class was all too evident as eight tries and eight kicks gave Salford a 48-0 lead at the interval.

Though the rate of scoring slowed after the break, a further three converted tries put the Championship part-timers, who managed just one score of their own through Danny Maun, to the sword.

The Bulldogs welcomed back hooker Kris Lythe as their only change to the squad.

Salford centre Willie Talau made his long-awaited return after more than two months on the sidelines, while Dean McGilvray made his first start since the Good Friday victory over Warrington.

Salford opened the scoring with only five minutes on the clock. Simple rugby unlocked the Bulldogs defence with Ian Sibbit making the initial break.

He fed Lee Jewitt on the outside and with numbers on the Reds’ side he hit John Wilshere with a well-timed pass and the full-back went over for the opener.

Wilshere converted his own score to give the visitors a 6-0 lead and three minutes later the away side crossed again.

Scrum-half Richard Myler dummeyed his way past a static John Gallagher and dived over the line with a couple of Batley defenders still hanging on to him.

And a third score for the visitors arrived in the 15th minute when the Reds moved the ball from right to left after the pack had driven the ball upfield.

on the left touchline, who scored. Wilshere added the extras.

In the 19th minute Stefan Ratchford coasted though a gaping hole in the Batley defence on his way to the line.

Wilshere continued to rack up the points and McGilvray went over in the corner for another when the Reds full-back and Jordan Turner combined to ship the ball wide.

Malcolm Alker then bulldozed his way over following some more poor field kicking from Paul Menell with Wilshere converting both.

As fatigue set in, gaps began to show in the Championship side’s defence.

Myler broke the Batley ranks from well within his own half and fed Robbie Paul, whose first touch of the game saw his score under the posts.

Feehan, who was made to endure a torrid half, spilt a kick in 33rd minute and Henry ran the ball in for his second of the afternoon.

Henry claimed his hat-trick minutes into the second half when the ball was spun wide to him and he sauntered his way over the line.

He helped himself to his fourth of the day when Myler’s high, hanging kick was caught by the advancing winger.

Although it looked as though Feehan had claimed it, somehow Henry gathered the ball and crashed over the try line.

Centre Maun stretched for the line in the 57th minute to resister Batley’s first score and prevent the whitewash.

Luke Adamson scored again at the death and Wilshere kicked the goal to wrap up a 66-4 win for the Super League side.