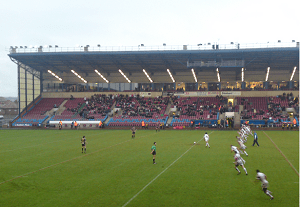 Salford City Reds cruised past Widnes Vikings 0-36 in a penalty-strewn final pre-season warm-up game of 2010. Full-Back Karl Fitzpatrick was both hero and villain, scoring two tries and then being sent-off for punching in a tumultuous first 29 minutes. However, the Reds weren’t at a disadvantage as the Vikings Tommy Coyle also saw red for the initial high-tackle on the Irish full-back, leaving it an even affair in which the Salford side were clearly too strong for their Championship hosts.

Three former Vikings did the majority of the damage with Adam Sidlow and Ste Tyrer joining Fitzpatrick in crossing the line during the rout, but in truth the stop-start affair – Referee James Child blew for 27 penalties throughout – rarely seemed to get going.